Tire marks are probably the most often confused and misinterpreted of all roadway evidence. A tire mark is the general class of marks left by a tire, whether rolling or locked. A tire skid mark is left by a locked, sliding tire.

There are different types of tire marks associated with a traffic accident investigation. Here, we describe tire marks, how to identify them, and their implications for an investigation.

Made by a rotating or yawing vehicle, a vehicle acceleration, or a flat tire.

Made by a tire that is rotating and sliding sideways parallel to that wheel’s axle; also referred to as sideslip or critical-speed scuff marks.

Made by a locked wheel caused by the application of the brake.

Made by a rolling tire.

Left by a wheel locked due to damage.

How to identify tire skid marks:

Caused by material embedded in the tire grinding along the surface of the roadway (can be hard to see).

Caused by the tire itself being ground by the abnormalities of the road surface (can also be hard to see).

Caused by a sliding and locked tire erasing or removing any loose materials from the road surface so that area appears clean (this is frequently seen but is the most commonly ignored skid mark).

Caused in a similar way as erasure and removing moisture.

Caused when snow, mud, or soil that has been smoothed or spread.

Caused when a tire is hot enough to smear tar and asphalt (the most commonly measured segment is referred to as a skid mark).

Caused when a tire is hot enough to smear the rubber from the tire; usually seen on concrete surfaces.

The part of a skid occurring prior to any pavement grinding; supposedly always present; more often than not extremely difficult to detect; almost always very difficult to document or image.

Caused by deformities in the road surface, or a vehicle weight shift.

Caused when releasing and reapplying brakes during a skid.

Caused by a sliding, non-rotating wheel creating a plowed depression in soft material so that material furrows on each side; no tire print is visible.

Caused by a rolling tire in soft material; the tread pattern is usually visible.

Typical scuff mark made when sufficient power is supplied to the driving wheels and at least one-wheel spins on the roadway surface; begins as a J- shaped mark, caused by initial fishtailing as the tires heat and seek traction; the beginning of the scuff is usually very dark, and the mark gradually disappears. 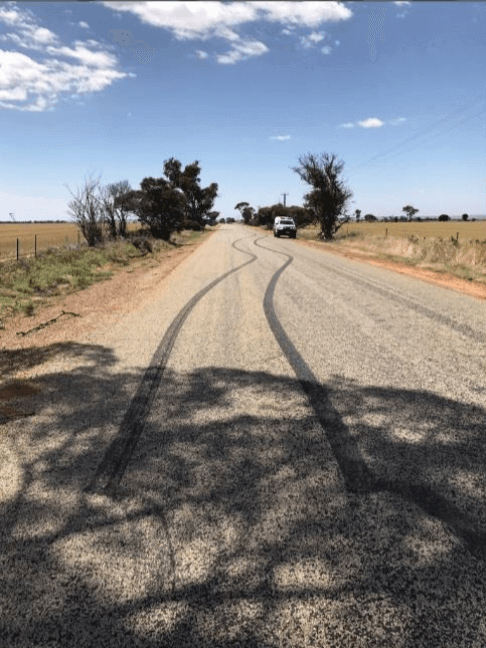 Produced when drivers backup and then shift gears to move forward before they have stopped going backward.

Made by a seriously underinflated or overloaded tire; a partially deflated tire produces marks that are heavy on the edges and light in the middle; with a completely deflated tire, the sidewall touches the roadway, causing scalloped and wavy marks, and rim cuts are commonly seen.

A tire mark from a wheel that is both rotating and slipping: acceleration scuffs, yaw marks, flat-tire marks.

A skid mark caused by the vehicle being redirected as a result of a collision; marks generally look like irregularly shaped smears and are characteristic of the point of impact.

The proper identification of tire marks is an important part of an accident investigation. Each tire mark is produced by a specific action of the vehicle during the traffic accident event. Tire marks can tell the private investigator about what a driver did or attempted to do prior to and after a collision. A point-of-impact (POI) or an area-of-impact (AOI) can be determined, which is an extremely important part of the traffic accident investigation.

The proper interpretation of tire marks can tell the private investigator which, of the many, speed calculation formulas to be used. For example, a vehicle left a 150-foot tire mark on a paved roadway prior to running off the road. If the tire mark is identified as a yaw mark and the specific formula for that type of mark is used, a speed calculation of 48 mph is determined. That same mark if identified as a straight skid will yield a speed of 56 mph. An 8-mph difference may not mean much unless the posted speed limit is 40 mph.

Understanding and identifying tire marks is an essential part of accident-reconstruction investigations and may provide more evidence for your case.

As a member of the Colorado State Patrol (CSP), Mike was active in the development of and founding member of the CSP Accident Reconstruction Team (A.R.T.). Mike received hundreds of hours of training from various organizations and has taught at numerous police academies throughout Colorado.

Mike has continued in the field of accident reconstruction and has testified in three states as an expert. Mike also acts as an advisory witness and teaches numerous classes in accident investigations. In his spare time, Mike enjoys traveling, photography, fishing, and spending time outdoors.

MJ Investigations is located in Colorado Springs, Colorado and can be reached at (719) 694-6343 or [email protected] Visit our website at www.mji.expert. Connect with us on LinkedIn, Facebook or Twitter.