Important Technology for Private Investigators in 2023 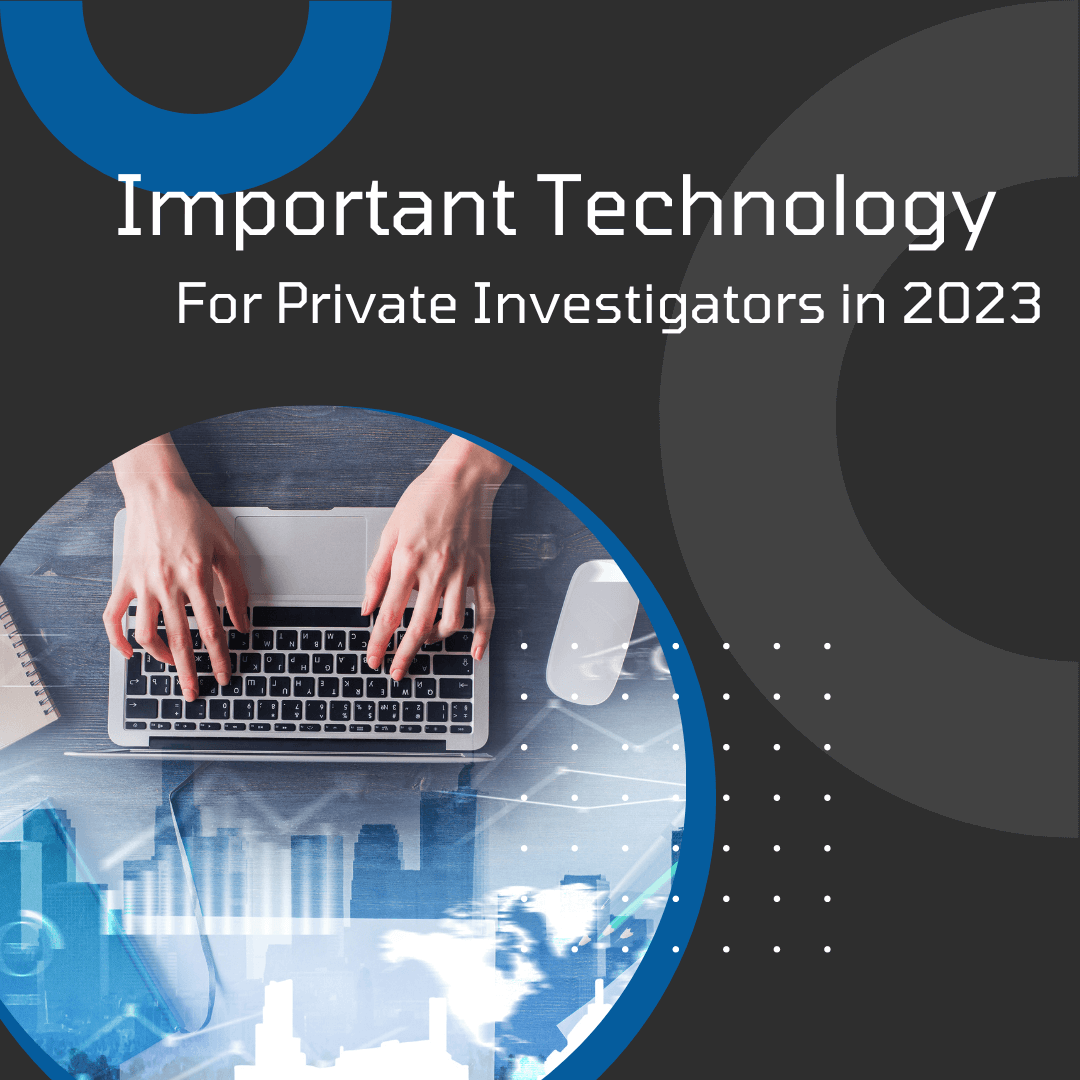 When PIs are searching for an individual, the first stop is to check the electronic paper trail to try and locate the individual. Sometimes, investigators may have a license plate number, which can break open a case. Having access to license plate databases can significantly improve the chances of locating the target individual. Known as skip tracing, this investigative tactic involves gathering some basic information and inputting it into a database in hopes of locating a valid address for an individual. This is often done by process servers who are attempting to serve an individual with court documents, but private investigators also utilize this technique to find missing persons. For a list of databases that are useful to investigators, check out this previous article on what databases PIs recommend.

For private investigators, having a camera and related equipment is a must, especially those who are working a stakeout or doing any type of surveillance. Smartphones are an excellent resource and can be useful in a number of ways, but their cameras often don’t have the zoom capability to really provide a clear image of the target from a distance. Investigators should invest in a camera, quality lenses with various zoom capabilities, memory cards, and batteries to collect evidence from their time spent surveilling a subject. New cameras may have built-in video capabilities, so it may not be necessary for an investigator to purchase that separately. However, having the ability to take both still images and video is part of the tools of the trade that investigators should have.

Microphones, bugs, and interview recorders all serve an important purpose for investigators. There may be situations where an investigator needs to be a fly on the wall to obtain evidence. Conversely, an investigator may conduct interviews that should be recorded. Recorded interviews provide a record of exactly what was said without worrying about transcription errors, failed memories, or misinterpreted tone. This can be helpful for an investigator who is going through the evidence and information later to dig up more leads, or it can be useful as evidence later in a court case. Some smartphones have apps that can do a great job of recording in a pinch, but investigators who conduct a lot of interviews may want to invest in more advanced recording devices. It is important that investigators are always cognizant of the recording consent laws in their state so that they do not inadvertently break the law while doing the job.

For private investigators who perform bug sweeps to try and locate hidden GPS tags, voice recorders, or video recorders, having a bug sweeping device is a required form of tech. For those unfamiliar with TSCM, read more about technical surveillance countermeasures on our website.

Smartphones are a must for pretty much everyone these days, but especially for private investigators. Having access to a tiny computer in the palm of your hand makes doing the job easier, especially when there are a number of smartphone apps that can assist investigators in doing their job. In the past, PIs would have to wait until they got back to the office, or lug around a clunky laptop to access important websites that could lead them to a target or find out more about their target. For example, for investigators who are working a workman’s comp case, may end up checking out an individual’s Facebook profile to see if they’ve posted evidence of them doing things that they said they weren’t capable of doing, which could be used by the firm in a case of fraud.

While smartphones really are tiny, handheld computers, it would be helpful for PIs, especially those who are operating their own business, to have a computer where they can conduct the non-investigative side of the business. Whether it’s accounting, client management, or having computer access for email and FOIAs, most private investigators who operate their own business will find having a reliable computer a required piece of tech.