Overwhelmingly, state licensure has helped promote ethical standards and elevate the profession as a whole. By and large, most PIs see licensure in that manner from the comments we gathered for this article. While Colorado has previously been one of the states with a mandatory professional licensing component in its legislature, the Act requiring licensure is set to be repealed as of September 1, 2020 as a result of a sunset clause and a blocked attempt to extend the Act. This means that as of that date, Colorado PIs will not be required to be licensed and the industry will be wholly unregulated.

Colorado has a long history with legislation regarding investigations. In fact, reference to investigations can be found in the 1877 Legislative Manual of the State of Colorado (made publicly available by Project Gutenberg), which states, “When an investigation is required into any matter, the person most interested in having the inquiry made, should move the appointment of a committee to take the subject in charge. This is done by resolution. The resolution should be so drawn as to state the precise subject to be investigated, and to give the committee all the power which the mover may deem necessary to a thorough examination into the subject matter to be laid before them; this should be done to prevent any misapprehension as to the intention and extent of the inquiry to be made.”

That legislation lasted for 100 years until the Supreme Court determined that there wasn’t a clear definition of a private investigator in 1977. There was no PI legislation until 2011, when Colorado passed the Private Investigators Licensure Act that defined private investigators and outlined voluntary licensure, which went into effect in 2012. Then in 2015, a mandatory licensing law went into effect, but it was done so with a sunset clause to review and end the mandatory licensure in 2020. The Act remained largely the same until 2019 when some of the language was cleaned up, the built-in sunset clause was reviewed, and the clause was recommended to remain included in the Act. Upon the sunset date of September 1, 2020, the Act would be entirely repealed and the private investigations industry would become completely unregulated.

The Professional Private Investigators Association of Colorado (PPIAC), which worked to help institute the 2015 Act, has been following this legislation and works with legislators to enact measures that positively affect the industry. Robert Orozco, PPIAC’s Vice President of Legislative Affairs explained, “We helped bring forth the PI licensing program due to documented harms prior to 2015. In short, the program's goal was to reduce consumer and public harm, and to provide protections to consumers and the public. Having experienced first hand what the environment was prior to 2015, we are very certain there will be a return of consumer and public harms.” He continued, “The program by and large has been very successful in reducing harms, and in its stability as a self-funded program.” 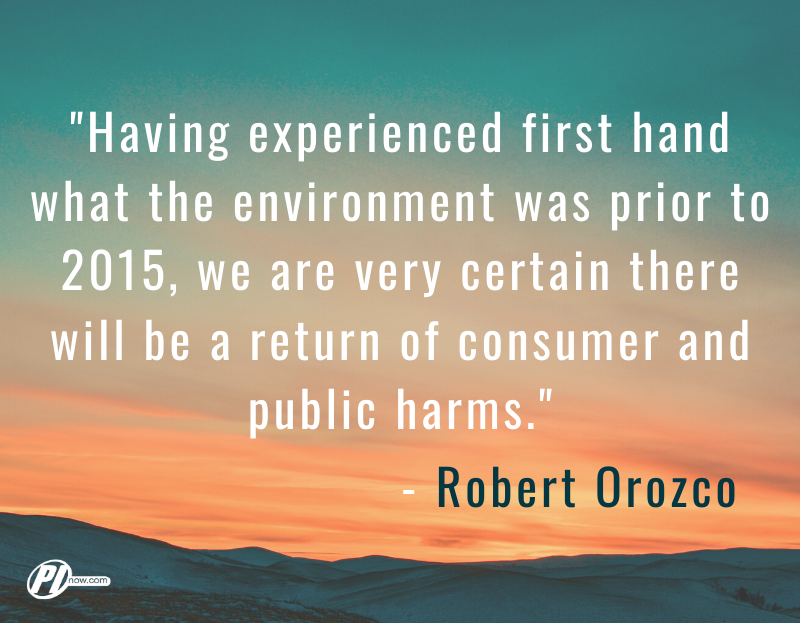 A new bill was proposed to extend and continue the mandatory licensing program until September 1, 2025. It was approved by both the House and Senate in legislation; however, on July 11, 2020, Colorado Governor Jarod Polis vetoed the bill in a move that swiftly undid all of the work that the PPIAC and others have worked on for the last five years. Unless new legislation is proposed and passed (and not vetoed) before the sunset date, things will be changing in the PI industry in Colorado.

Upon hearing the news of the blocked extension, Orozco commented, “Despite its successes, DORA shockingly recommended the program sunset due to a lack of harms. They pointed out a total of 77 complaints in the less than 4 years the program was in effect at the time of the sunset study, and despite their own data clearly showing an increase in the amount of complaints every year. They also left the nature of the complaints vague, only providing broad generalities of their nature in the sunset report. From our perspective, the changes, problems and consequences of going from a licensed to a non-licensed environment are certainly numerous and overwhelmingly negative.”

With many groups and private investigators being proponents of state licensure, the news that this Act could be repealed was of great importance to investigators not just in Colorado but from around the country. Most expressed a sense of concern over the possibility of unlicensed PIs negatively impacting the industry as a whole while praising the benefits of licensure. 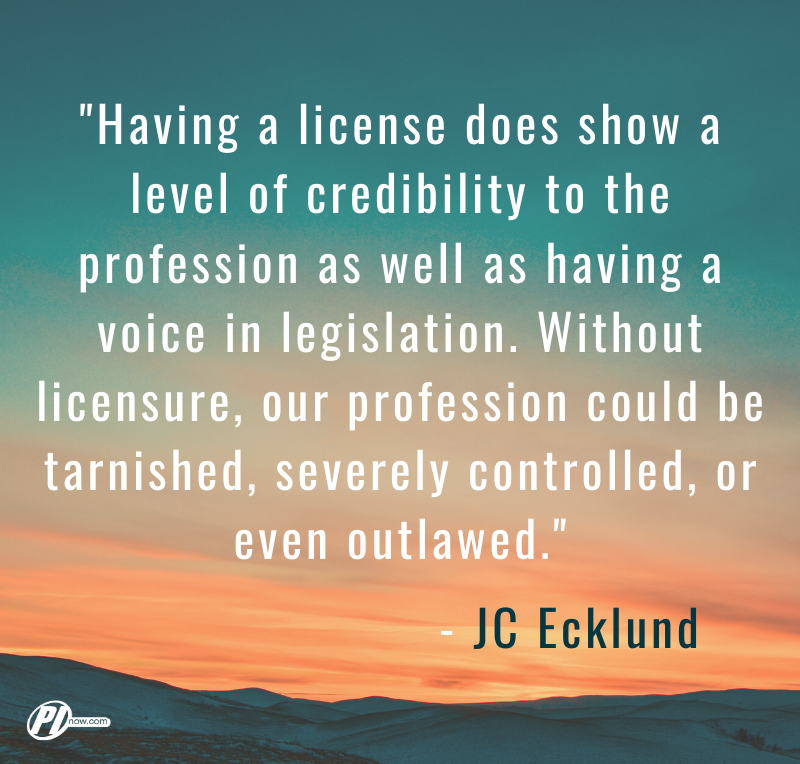 Private Investigator JC Ecklund, who previously worked as a PI in Missouri but who will be operating out of Florida after completing their state licensure requirements, expressed concern over removing licensure requirements: “Without Licensure, you are limited with access to professional databases, insurance, training, and or education. Having a license does show a level of credibility to the profession as well as having a voice in legislation. Without licensure, our profession could be tarnished, severely controlled, or even outlawed.”

North Carolina PI Joel Johnson echoed Ecklund’s comments: “I believe licensing is overwhelmingly positive for the industry. Without it, anyone can hang a shingle and call themselves a private investigator. Without some sort of oversight, the industry would rapidly become contaminated with unsavory individuals.”

The comments remained fairly consistent, no matter which state the commenter hailed from, with nearly all pointing to the negative implications that not having licensure could bring. Without licensure, there would be no background checks, no insurance requirements, no professional development or training, no standards, no ethical standards, and more. Anyone could become a private investigator and do the work of one without any oversight.

William Edward Hampton provided strong words about the potential deregulation: “It's the biggest mistake that Colorado has made. Without any type of licensing in that state, a lot of riff raff is going to claim that they are private investigators.”

Valerie Good McGilvrey offered that, “Without licensure, there is no mandatory annual continuing education which places the general public at risk for malfunctions with evidence and even a basic understanding for state law as it pertains to the specific type of investigation conducted.” 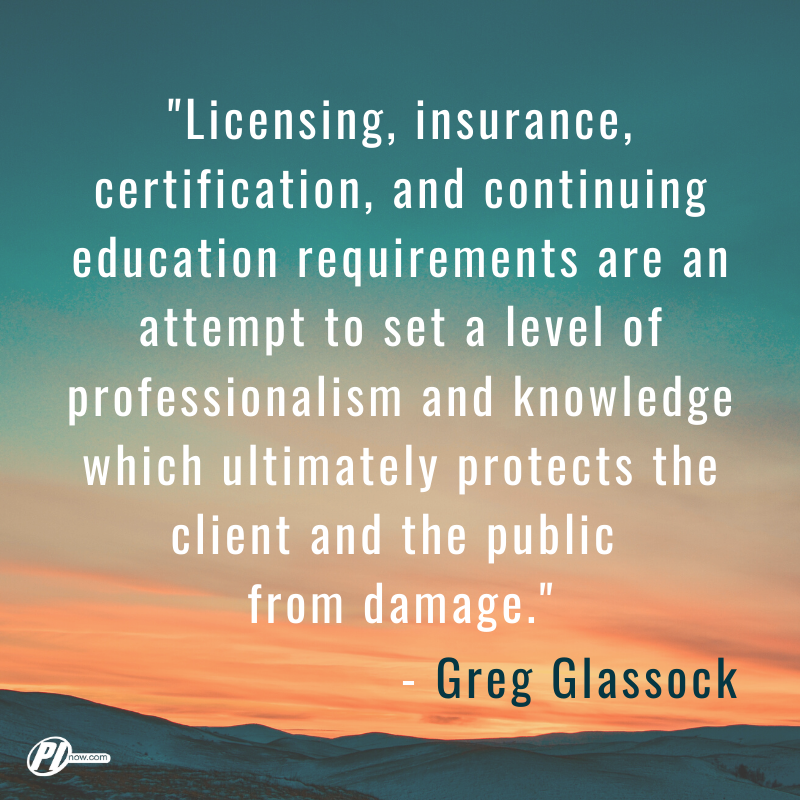 Expressing not only the preventative measures that licensure brings forth, PI Greg Glassock also noted that licensure elevates the profession: “Licensing, insurance, certification, and continuing education requirements are an attempt to set a level of professionalism and knowledge which ultimately protects the client and the public from damage. I see no upside to a lack of licensing. A totally open market is a welcome mat to shady characters. We operate in WA and OR, both states have licensing requirements.”

Impact to Industry as a Whole

As many of the private investigators expressed, the industry is filled with individuals that want regulation. The licensure fees were not so exorbitant that they served as a deterrent and, as a result, the regulation had a positive impact on the industry. Not having these requirements could be detrimental to not just private investigators in Colorado, but the reputation of the profession as a whole.

Worst-case, nightmare scenarios that could soon become very real in Colorado were brought up by Robert Orozco. He explained, “In worst case scenarios, consumers can unwittingly hire PIs who have criminal records.[...] For legal cases, the stakes are especially high. They might hire a PI for legal work only to find out the PI’s work product and/or testimony is not credible or not allowed.” While these negative effects might seem superficially minor, they are just the surface of what is problematic about a lack of industry standards and licensure requirements.

He also brought up what has become a growing concern across the United States: data breaches and identity theft. Orozco continued, “Consumers who entrust the PI with sensitive, delicate, and proprietary information may find that the PI has not kept the information confidential and may even use the information for blackmail, collusion, and other nefarious purposes.”

Orozco brought forth chilling scenarios in which individuals’ safety could be at stake: “Pedophiles can interview minors. Stalkers can conduct surveillance. Nefarious individuals can blur privacy lines by improperly using GPS tracking devices, placing tracking/keystroke software on electronic devices, and place covert audio/video recording devices in private spaces. With no standards of practice, PIs can be sex decoys. They can resort to strong arm or intimidation tactics.”

Furthermore, third-party stalking legislation would also be gone as a result of the repeal of this Act. Orozco explained, “The third-party stalking was addressed in DORA's Rules. One of our allies, Violence Free Colorado, was instrumental in having language placed in DORA's rules which disallowed PIs from providing location information on protected parties. The entirety of DORA's Rules is gone with the bill's veto.”

Beyond the obvious impact of having no licensure requirements, Colorado private investigators may see other changes in the wake of the sunset clause if nothing is done to prevent the repeal. While Colorado PIs are currently required to be insured and bonded, this will soon no longer be a requirement. Those who choose to maintain their insurance may see rates rise.

Colorado PIs may even have trouble accessing databases and may put themselves in jeopardy of being arrested while working a case if they are caught surveilling a subject.

While overwhelmingly, private investigators have been in support of professional regulation and licensure, there are some who will find the lack of regulation nothing short of a blip on the radar. Some have expressed that they’ll be able to secure extra help for difficult cases without requiring the extra help to jump through the licensure hoops. Others said they wouldn’t have to deal with licensing.

Keep an Eye on Legislation

No matter where you personally stand on the issue, the repeal of this act will have a significant impact, not just on PIs in Colorado, but on the profession as a whole and ordinary Colorado residents. Industry regulations, requirements, and changes are proposed through legislation, so it’s important to stay on top of it. Because legislative news can change quickly, stay apprised whether that is by looking it up yourself, being a member of your state’s private investigator association, or staying up to speed with industry organizations like PInow.