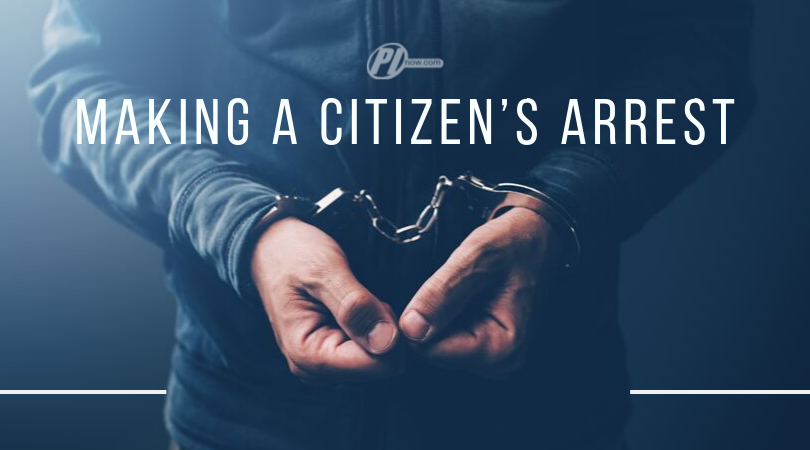 With a nationwide shortage of police officers, many departments across the country are running short-staffed. The effects of this shortage proliferate into communities large and small, as there are fewer “good guys” around to stop the “bad guys,” and officers are often dispatched from call to call, resulting in longer response times and, in some cases, no response at all. What does this mean for individuals faced with a crime in progress? Keep reading to learn more about making a citizen’s arrest.

When Can Someone Make a Citizen’s Arrest?

Many individuals believe that if a crime happened or is happening, they can make a citizen’s arrest. While making a citizen’s arrest is an option in the United States, each state’s laws vary, just as with most issues related to process serving and private investigation. It is always best to review your state’s statutes to be aware of legislation regarding citizen’s arrest to ensure you do not break the law if put in that position. In the event that you unlawfully enact a citizen’s arrest, you could be arrested yourself for false imprisonment and/or impersonating a peace officer among other potential charges. Furthermore, this could lead to lawsuits by the person you arrested.

Though state laws vary, most states have some provision allowing a citizen’s arrest in certain circumstances. For example, in California, private citizens may arrest another individual who commits a public offense in that citizen's presence. They can also make an arrest if that individual has committed a felony regardless of whether it was committed in their presence.

Conversely, in states such as Texas, Arkansas, Kentucky, Louisiana, Massachusetts, Michigan, Nebraska, Ohio, South Carolina, and Wyoming, a citizen’s arrest may only occur if the offense is classified as a felony or an offense against the public peace. This list is not meant to be exhaustive as some state’s laws may be unclear and/or up for interpretation.

Before You Make a Citizen’s Arrest

Before you make a citizen’s arrest, you must determine whether or not there is probable cause, as well as reasonable suspicion that a crime was committed. Keep in mind, if no crime was committed, you should not attempt to arrest an individual.

Reasonable suspicion applies the logic that you, as the arresting citizen, have specific facts and rational inferences that the specific individual committed a crime. If you’re interested in reading more about reasonable suspicion, you can read two legal opinions published on the matter: Terry v. Ohio (1968) and Ybarra v. Illinois (1979).

Probable cause, though similar to reasonable suspicion, is a bit different. Probable cause indicates that there must be facts and circumstances that would lead a reasonable person who is completely objective of the situation to believe that the individual subject of the citizen’s arrest has committed, is committing, or is about to commit a crime.

Furthermore, it is important to know your ability to restrain yourself as you must only use reasonable force to make the arrest. If you exhibit excessive force and end up physically harming an individual, you may find yourself in hot water with the law — and with the courts as the arrested individual can sue you.

How to Make a Citizen’s Arrest

If you are confident that you are within the scope of the law and you are faced with a situation in which you deem it prudent to make a citizen’s arrest, this is how you should go about doing it:

Citizen’s Arrest as a Private Investigator

As many are aware, private investigators are not peace officers, and as such, you should follow the guidelines established for private citizens — even if your state requires licensure and professional training, and even if you carry a badge and a weapon. In fact, for those carrying such items, there is a greater risk that you may end up being charged with impersonation of a peace officer. It is imperative that if you find yourself in a situation in which you intend to make a citizen’s arrest that you make it clear that you are not a police officer, and it would be wise to have emergency services on the phone as the situation unfolds. It is always helpful to have a recording of the event, so having such technology on your person (body cam, cell phone recording), may protect you from harm in the future.

Be Wary of Making Citizen’s Arrests

Ultimately, the laws are not exactly black and white, and there is an inherent danger in arresting someone as a private citizen. Not only should an individual be concerned for his or her safety at the time of the arrest, but there is the potential for consequences legally as well as a physical danger. An individual arrested may choose to sue you if you arrest them, especially if that person is subsequently not penalized by the legal system. Additionally, as we mentioned previously, there is a possibility that you could be charged with false imprisonment, impersonation of a peace officer, and more, especially if things get physical while you are detaining an individual. Since there is such a risk, it is important to thoroughly weigh the pros and cons before choosing to make a citizen’s arrest. Our police departments, no matter how understaffed they may be, are there for a reason. Use them.

When Citizen’s Arrests are not Possible

If you deem that you are unable or rightfully unwilling to make a citizen’s arrest, there are still steps you can take to aid law enforcement. Noting their physical appearance, any defining and unique characteristics, their license number, when and where the crime took place, and any other details of the crime are all beneficial to an investigation.

If it is safe, video or voice recordings of any interactions provide valuable and often irrefutable evidence. Just because a citizen’s arrest is not possible does not mean your cooperation and evidence is not of use. Always be sure to contact law enforcement as soon as possible.

In your attempts to keep your community safe, be sure that your wellbeing is also safeguarded.

*To join the conversation, join the PInow group on LinkedIn.