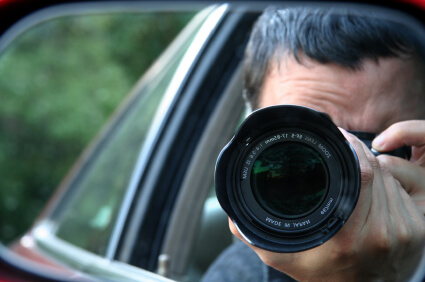 Editor’s note: Steven Handlin is an investigator with 25 years of in-depth experience with surveillance regarding third-party liability and worker’s compensation claims. His case studies are intended to provide real-world examples of surveillance techniques that private investigators can apply to their own investigations.

This case involves a 30-plus-year-old claimant working in a clerical position who was employed by a law firm. The claimant reportedly injured his back lifting up boxes of Xerox paper. He remained out of work for about a year but our carrier client became suspicious of certain inconsistencies with his whereabouts during the day. We were retained to conduct surveillance efforts over the claimant’s activities.

Upon receipt of said assignment we focused our efforts on determining whether the claimant’s driving record contained any information concerning any prior or subsequent vehicle accidents. As our search came up with no results we had known from our IME that the claimant indicated he drove back and forth to their office. As a result of this we processed him through one of our databases, learning that he showed another residence not including the high-rise building he resided in near Coney Island situated in Brooklyn, New York. This other location was in South Carolina. That being said inquiries both of a personal and confidential nature were made, however we learned that the claimant resided in Brooklyn.

We concentrated our investigation towards determining whether the claimant had a South Carolina driver’s license and potentially any registered vehicles. We found that he had a driver’s license and two vehicles in South Carolina. One was identified as a late-model, four-door sedan while the other vehicle was a Mitsubishi box truck. It was surprising to us why a clerical person would own such a vehicle.

Difficulty in making ID of claimant

On the initial day of our surveillance we arrived at the Coney Island building at 6:00 a.m., where we trusted that the claimant was residing. The building, as expected, was about 15 floors and had a parking lot on the premises. A search was conducted of the parking lot where we found the late-model, four-door sedan. There was no sign of the Mitsubishi box truck. Immediately we conducted a cursory check of the area but as New York City streets do not allow trucks parked overnight, we decided to maintain our efforts on the sedan. Throughout the morning hours there was no movement of the sedan and we did not want to spook the claimant by attempting a physical ID of him.

Perseverance of our office in making ID

We attempted a few hours each morning in hope of making ID but he never drove the four-door sedan. Ultimately, we had to be certain that the claimant was residing in the apartment so we decided to go ahead with a suitable pretext that we trusted would work. After gaining access to the building we proceeded to the claimant’s apartment on an upper floor. The door was answered by a woman whom we learned was his spouse. Through our pretext we found that the claimant was not at home but at physical therapy. Realizing that our client would be billed for the physical therapy, they contacted the therapy office for a billing update. Once the therapy office responded and the claimant had not reported for therapy on the date in question, we were sure that we struck gold. The only question remained was how the claimant traveled to the “therapy” office.

We anticipated that someone may be picking him up in the morning but we had no ID on him and could not risk returning to the apartment. We needed to identify where the Mitsubishi truck was parked so we could concentrate our efforts there. As it turns out there were many parking lots housing commercial-type trucks in the Coney Island area, none of which had positive results. With additional research and through sources we found various locations where these trucks may be parked. After concentrating a weekend search of these locations entailing a circular search of communities surrounding Coney Island we located the claimant’s truck parked in a nearby community about 3 miles from the claimant’s residence. The weekend search was done because the likelihood of the claimant’s use of the truck would be less than that of a weekday. The truck was void of any identification except that it had South Carolina license plates.

The following week we started our surveillance during the early morning hours. A short time later we observed three men moving in the direction of the truck and entering it. Our agent took up pursuit of the truck, following it to many stops in the local neighborhood. As we learned, the truck was used to remove scrap metal from resident’s homes including refrigerators, freezers, air conditioners and similar items. In one location our agent approached one of the workers who we knew was not our claimant, developing information that the “boss”, our claimant, was at the location. Our agent explained to the worker that he was on his way to work and did not have the time to speak about his “garage being overloaded” but asked for a business card. The worker handed him the card that clearly identified the claimant.

We successfully gathered video evidence of the claimant engaged in activities inconsistent with his claims of disability. The claimant was videotaped moving refrigerators, freezers and the other items previously mentioned. At one point while moving a refrigerator into the truck he went to position it and it fell on him, and he moved it away without any assistance from his helpers. After reporting our developments to the client, we were asked to continue with further surveillance. Each time we went out the claimant picked up similar items that the residents paid for and then turned around and disposed of them at a scrap metal yard.

Rather than belabor the point the claimant’s benefits were curtailed and the referee had investigators from the district attorney’s office standing by to arrest the claimant.

In summary, by conducting diligent efforts we solved the claim and saved our client thousands of dollars. We recommend to our fellow investigators that although certain challenges and difficulties appear you need to be focused on the main objective. That becomes simple since your clients are your livelihood and by pleasing them your firm will continue to have a relationship that may last for years. In my 25 years in business we have inherited other files that were mismanaged by other firms as they did not take that extra step and did not conduct the research needed to turn a case around, or they sent inexperienced agents to do work that a more experienced agent would be better prepared to do. Keep your nose to the grindstone and you will maintain your clients for years.

Steven Handlin has been the owner of Bolt Claims Bureau, Inc. since 1986 and enjoys each day in the industry. He is a member of ALDONYS (Associated Licensed Detectives of New York State) and a member of their enforcement committee making certain that unlicensed investigators are reported to the Licensing Authority. He also belongs to NALI (National Association of Legal Investigators) and IJI (International Association of Jewish Investigators).