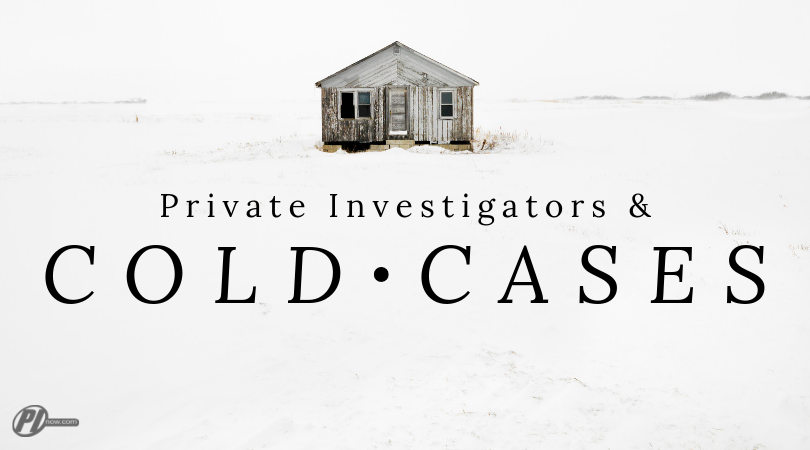 When we hear the phrase “cold case,” we immediately think of television—police dramas and procedurals that capitalize on the challenge of approaching a cold case with a new set of eyes and unearthing fresh leads that culminate in a contrived solution. In reality, cold cases are far more diverse and complicated than the small screen makes them seem.

Conversations and associations with cold cases usually orbit around unsolved homicides—but other egregious crimes, such as sexual assault, kidnappings, and missing persons also go cold. Regardless of the case type, they all freeze over for similar reasons. For example, a lack of evidence or witnesses to generate reliable leads stop cases in their tracks. A study conducted by the RAND corporation in 2011 estimated that only 20% of law enforcement agencies in the United States have an established procedure for handling cold cases—only 7% have a dedicated cold case unit. As a result, cases have a tendency to pile up. Cases halt due to not be enough detectives to meet demand or a lack of resources that contribute to the detriment of the investigations. Stall in case progression can be as simple as having the same sets of eyes on a case for an extended period. A different perspective brings new light to a cold case, and that’s where private investigators come in. 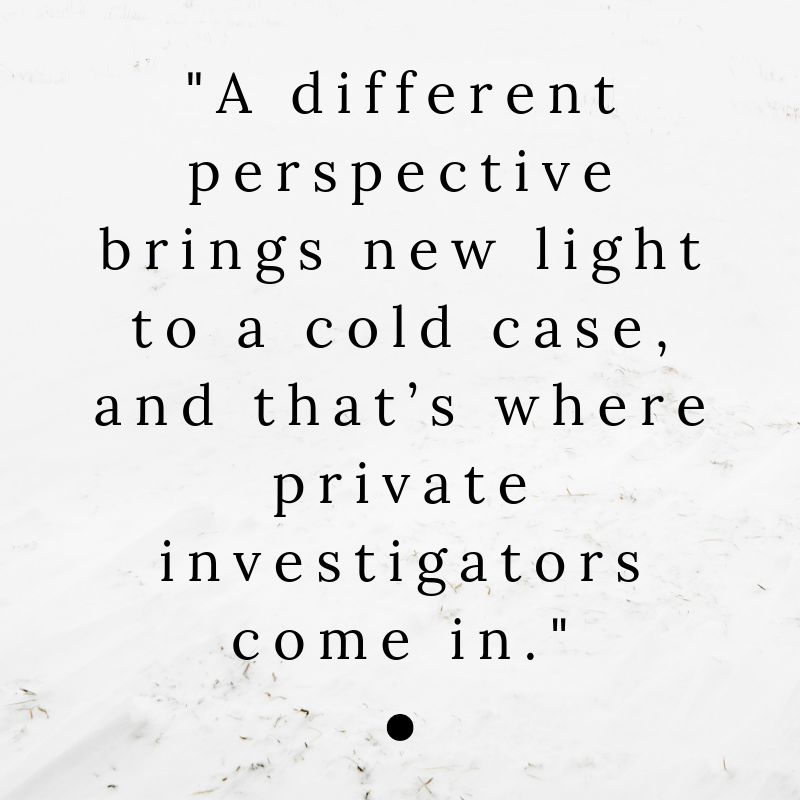 Police departments who can afford to do so implement teams of cold case investigators because fresh eyes are the answer to stagnated progress. Detectives at the onset of the investigation can do their very best, following every lead and reviewing every record available to them—but ultimately, case deterioration can be as simple as tunnel-vision. Personal bias can cause an investigator to get stuck on one investigative train. By the time it reaches a dead-end, valuable evidence and witnesses could be lost. When a new cold case investigator or a private investigator looks at the file, they bring a fresh perspective to the case. They can delve into unexplored angles of the case, review leads left open, or speak to potential witnesses who were overlooked by the original investigator. Private investigators typically have experience in law enforcement, as former officers, investigators for the prosecutor’s office, or some level of experience working with these individuals. When taking a fresh look at a cold case, it is valuable to have the benefit of that experience when it comes to assessing the strategies explored by previous investigators.

With their skill set and level of licensure, private investigators can bring something to the table that law enforcement cannot: autonomy. Just like any bureaucracy, there is a chain of command that might prevent law enforcement from moving forward with a lead. For instance, new information might lead detectives outside their jurisdiction. As self-employed agents, private investigators can follow a potential witness’ trail out of state and track down information that might otherwise be lost to an original investigator. An independent investigator working the case also means that there is no chance that undefined politics or optics will impede case progression. 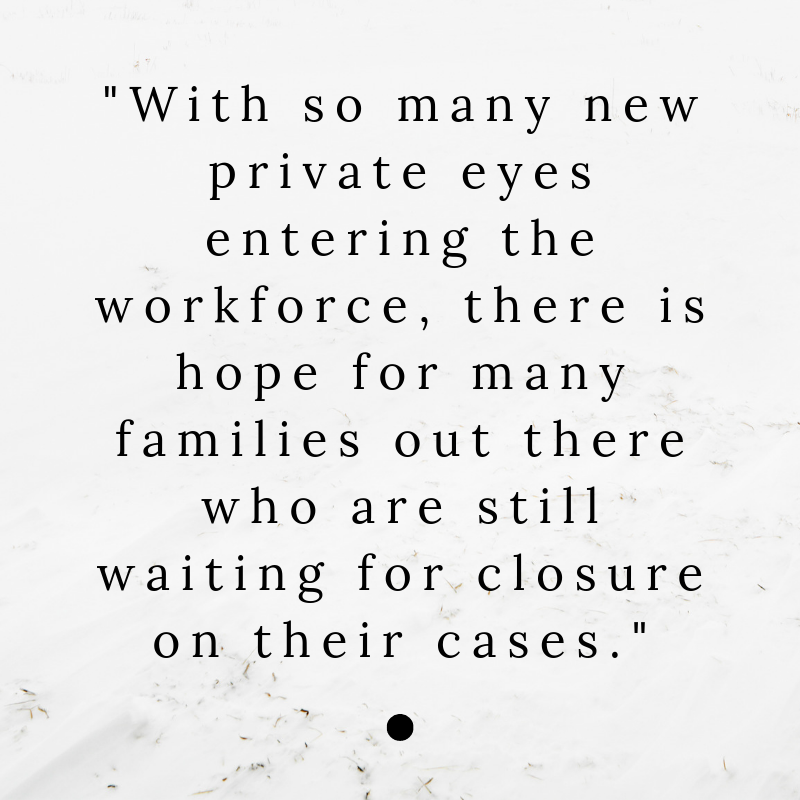 Despite the media intrigue that surrounds cold cases, it’s sometimes easy to forget that at the center of a cold case, there is a victim, a victim’s family, or both, who are waiting for justice to be served. Especially in the case of homicides and missing persons, families can wait in anguish for years, sometimes decades. Chipping away at a stack of unsolved case files is not merely important for case management, but at the center are human beings who are desperate for answers. Therefore, it’s important for private investigators to solicit or even volunteer their time towards cold cases. When new investigators pick up a cold case, they have the important opportunity to jumpstart case progression after years of quiescence and bring closure to grieving victims and families.

Over the last twenty years, we’ve seen a steady increase in the level of licensed private investigators across the country. A significant percentage of those seeking licensure are current or former journalists. As print publications and smaller periodicals suffer layoffs and closures across the country, more of those unemployed journalists are turning to private investigative work. In 2018, The Bureau of Labor Statistics projected that the private investigation sector will grow 11% over the next ten years. With so many new private eyes entering the workforce, there is hope for many families out there who are still waiting for closure on their cases.

The world of cold case investigations needs private investigators. Whether on retainer or a volunteer-basis, it is paramount that these stagnated cases receive a fresh perspective in pursuit of justice. No case, regardless of crime, is closed until it is solved, and sometimes all it takes is a thoughtful and creative investigator to uncover the answers in some of our country’s most difficult cold cases.

Do you have experience with investigating cold cases? Make your voice heard by joining our groups on LinkedIn* and Facebook or contact us.

*To join the conversation, join the PInow group on LinkedIn.