Confessions of a Private Eye: The Author's Insight

At the age of eight, I discovered The Adventures of Sherlock Holmes and a popular children’s book series called The Three Investigators. They were hidden on the dusty shelves of my elementary school library. To say I was hooked would be an understatement. From then on, I wanted to be a private investigator.

Fast forward to 2018, and I’ve spent about the last thirty years of my life working as a private eye. In late 2016 I finally put pen to paper and began to write about my experiences and many of my more interesting cases. It took a little over a year, but my efforts resulted in a new true-crime memoir entitled, Confessions of a Private Eye: My Thirty Years Investigating Cheaters, Frauds, Missing Persons and Crooks. It is now available on Amazon.com.

Throughout the 256 pages and seventeen chapters of this trade paperback book, I describe how I became a private investigator, some tricks of the trade, and the mistakes I’ve made along the way. In Confessions of a Private Eye, you’ll find a stirring narrative and real-life cases mixed with humor and the stark reality of the curious ways people hurt the ones they love. Cases such as The Hands of Joy, The Great Tortilla Caper, and A Stripper Named Tiny Bell may seem fantastic, but they are all too real. From surveillance to background investigations and missing persons to kidnapped children; I’ve seen it all. 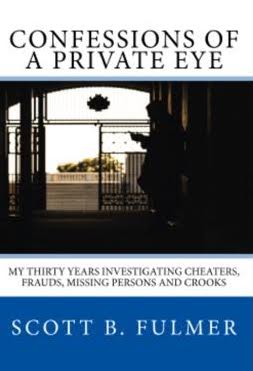 The genesis of the book has been a natural progression borne out of writing numerous industry articles, blogging, and podcasting. I’ve owned private investigation firms in Texas, Missouri, and Utah and have traveled throughout the U.S. working cases. As I’ve done so, I’ve had many opportunities to talk with people about what I do. Their responses have always been the same. You should write a book! In keeping with the often strange and diverse experiences I’ve had, I thought about titling it, You Can’t Make This Stuff Up.

I go into detail about the typical caseload I’ve covered. From finding runaways and busting insurance fraud to conducting sensitive national security background investigations for a large government contractor. My cases have included traveling and of course, surveillance. I’m always watching someone. Workers’ comp, personal injury fraud, and the ubiquitous cheating spouse and child custody cases. I enjoy the work because each day is different. I’ve never been one to sit behind a desk.

Throughout it all, Confessions of a Private Eye provides a rare insight into what it’s like being a private investigator by someone who has been there. Much of what people know about the profession comes from the pages of fiction or from television shows like The Rockford Files or the new ION television series, Private Eyes. I think my book provides a truthful portrayal of what it’s like to be a private investigator. It accurately depicts the boredom and financial feast or famine many real private investigators experiences. I often tell clients, “Things don’t necessarily happen like they do on television.” In Confessions of a Private Eye, I write, “I sometimes feel strained. I see the worst in human nature. Cheating and lying. Fraud and greed. Assault and abuse. Sometimes it feels too heavy to bear, like a tremendous weight I can’t get off my back” (pg. 242). Of course, much of this is the nature of handling emotionally charged domestic cases. “I grow weary of trying to come up with last-minute practical solutions to other people’s desperate problems…I feel stretched. As if there’s not enough of me to go around. As if I’m giving one hundred percent to everybody and it never seems to be enough” (pgs. 242-243).

Scott B. Fulmer is a well-known Utah private investigator, author, and speaker. He has written articles and blogged about the private investigator industry in a career that has spanned almost three decades. Scott is the lead investigator and principal at Fulmer, P.I., a Salt Lake City-based private investigation firm. He is a decorated combat veteran of the Gulf War and has a degree in criminal justice from the University of Texas at San Antonio. He resides somewhere along the Wasatch Front near Salt Lake City with his wife Valerie, also a licensed private investigator. Scott is available for media appearances in conjunction with his book and to speak to your group, seminar or conference. You may direct all inquiries to fulmerpi.com or contact him directly at [email protected] His new book, Confessions of a Private Eye, was published in February of 2018 and can be found on Amazon.com. It is available in both paperback and eBook.