To understand the comparison, take a look at the data below.

Investigations on the Rise

The below chart displays investigation types on the rise based on the 2012 survey. 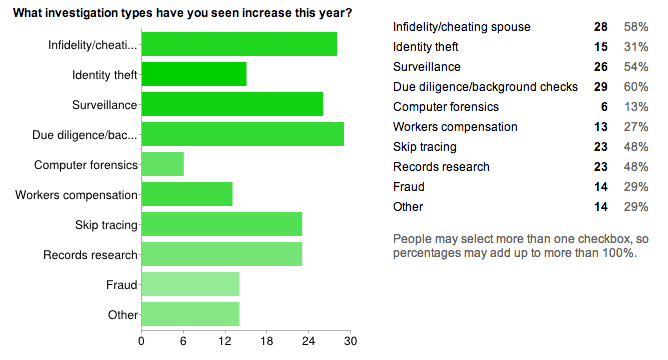 Investigations on the Decline

The below chart displays investigation types on the decline based on the 2012 survey. 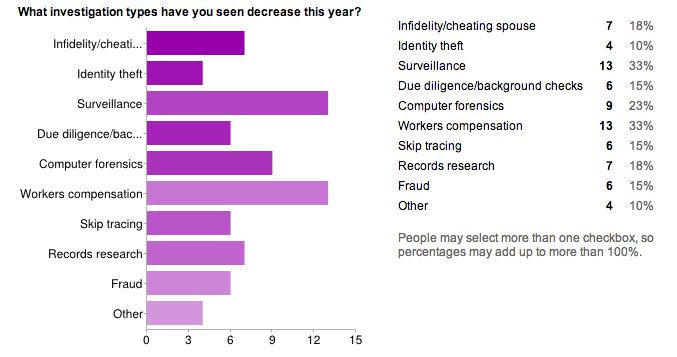 Top 25 Investigation Types Viewed in 2012 vs. the Past Year

Top 25 Viewed in the Past Year

Because this is based on articles viewed, there are some factors that can influence these numbers, including what was shared on social media, highlighted in newsletters, etc. In any case, it is still interesting data to look at.

Increases and Decreases in Key Investigation Types From 2012 to Present

To look further into these changes, we've calculated percent increase or decrease in views of some of the common investigation types. This gives an idea of what investigation types consumers are researching more now compared with two years ago. We've shared the information in the list and graph below.

As you can see, while the majority of investigation types have seen an increase in views, articles on Bounty Hunting, Civil Investigations, Executive Protection, and Polygraph/Lie Detector have seen a decrease.

Articles on Cell Phone Records have increased views by 72% since 2012, while articles on Polygraph and Lie Detector Investigations have dropped by 110%.

Civil Investigations: down 29%
Executive Protection: down 54%
Polygraph/Lie Detector: down 110%

What investigation niches have you seen a spike in requests for? Are there any requests that have dropped off significantly? Let us know in the comments below.