We surveyed a group of active private investigators for their opinions on varying state-to-state standards for members of their profession, as well as their opinions on what licensing and registration should be required.

Opinions of Licensing and Registration Requirements 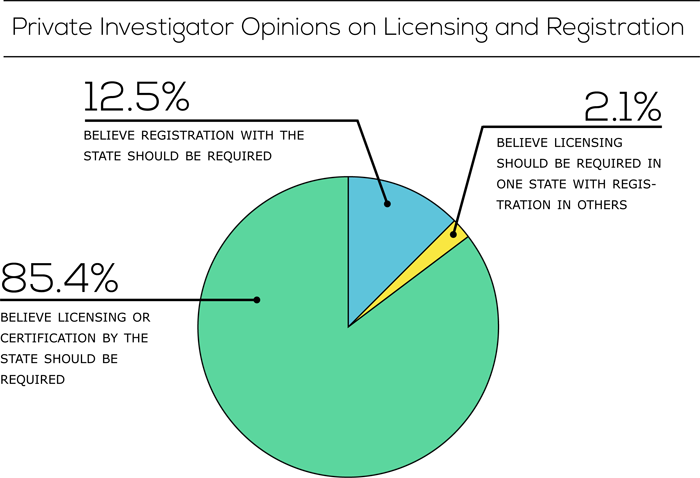 Opinions of Varying Standards from State to State 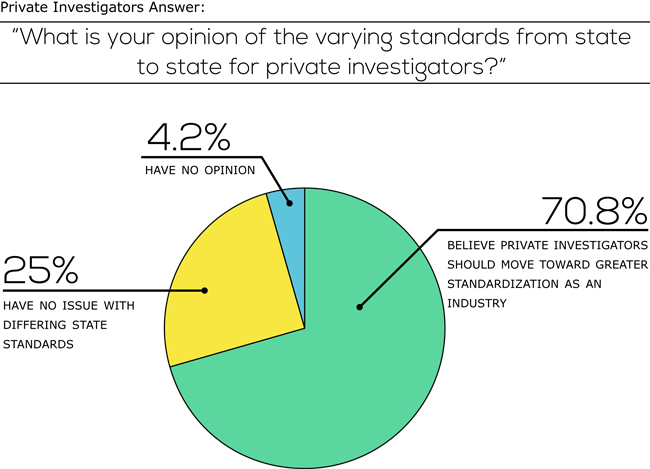 As displayed in the above chart, over 70% of investigators believe that members of the profession should move toward greater standardization. Still, 25% of survey participants did not have issues with differing state standards and 4.2% had no opinion.

“Since licensing, it seems that the legal profession has taken offense to us cleaning up the profession.”

“In Missouri, where our home office is, there are many concerns around the licensing law, which is new. There is no real state association yet, though we're working on it, there appears to be no disciplinary action available for those operating without a license and there are several other concerns with the law, including the fact that some convicted felons were allowed to have licenses.”

“Unlicensed activity and the Board not having any enforcement power against those people [is an issue in my state]. They can only act against already licensed agencies and PIs.”

“That we cannot have an actual professional looking identification [in my state]. We go through the years to meet the requirements from the state, then we take the test and pass. Then we get insured to be professional. Then we get an inadequate paper / plastic ID from the state that looks cheap, unprofessional and a disgrace to us that went to good lengths to get licensed.”

“There are no unique concerns in our state. We recently lobbied to change our PI Licensing requirements. We now have new laws that make our industry more respectable not only in the state but across the country.”

“Our number one issue is business regulation by the State (fighting over which agency should regulate). Ethics and unlicensed people is an issue as well”

“[Our issue is] convincing investigators that licensing in Colorado is good for the profession, and will ultimately help with records and database access. As licensed professionals, we can have a united voice.”

“In Missouri, one of the states where we are licensed, the licensing law is new and has been challenged and they are no longer enforcing it. They aren't even sending out letters anymore to unlicensed investigators. The system has been completely undermined.”

“Lack of unlicensed activity enforcement [is a problem].”