We received an email request through our website from a person who asked if we could solve his problem.

A company executive in his late 70’s contacted us, describing the business he built from the ground up. The office building was newly constructed with views outside from large floor-to-ceiling windows. He was concerned that another executive within the organization seemed to know all about the confidential business that was conducted within his private office, his executive assistant’s office, and the VP/Treasurer’s office.

We were able to solve this case. The executive’s relief was obvious, given the tears in his eyes, when we explained who was spying on him.

The suspect spying on our client was his own son.

His son was scheming to take over the business. By eavesdropping on conversations, undermining his father’s decisions, and pricing to win clients once loyal to his father, the son tried to erode his father’s credibility and inferred that his father was senile and incompetent.

How could this have happened?

The situation first started when the son hired an incompetent and under-qualified female to a high level VP position with an equally high salary. This caused havoc with the upper management who had been loyal for years and helped build the business. A top salesman was so upset by the incompetency of the newly hired VP that he resigned. Within a year, the business declined. My client fired the VP, which upset the son because he was having an affair with this woman. So began the son’s undermining of the father’s business.

A Law Enforcement Associate was called, but since a crime could not be proven, he was unable to do anything about the snooping son. The Law Enforcement Officers advised my client to call them if things got violent.

The police were not able to help our client, nor did they have any interest in investigating the matter further. Unless there is a crime happening right in front of them, they usually don’t take further action. They are simply not equipped to deal with this type of situation.

Two of our investigators were brought into the building after business hours to conduct a thorough sweep. Nothing was found and the investigators left before employees returned the next morning.

Disappointed, we talked with the client again. This time the executive revealed that his son was always in his office when important meetings were being conducted within the other offices, with his office door closed and locked.

This new information got us thinking further. Our client wanted answers, so we set a honey trap for this to happen again.

Our client spread the word that an important meeting would take place and he did not invite his son. The trap was for us to observe the son in plain sight through the large windows from the outside parking lot. Sure enough, the son was in his office with his door closed. We observed the son take out his laptop, open it, attach a device, and point the device up toward the overhead vents above his desk. 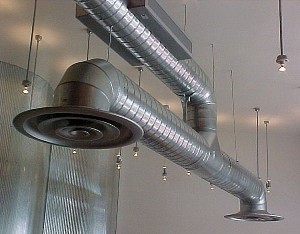 We suspected the son used an amplification device attached to his laptop to record the conversations through the HVAC trunk piping system.

The next day we accessed the building again. Upon physically walking the entire 14 foot open area proposed for future expansion to the building’s second floor, and looking down at the drop ceiling tile, electrical conduit trunk wiring and air/heat ventilation, we could see the poorly designed main trunk line and feeder piping to all the offices. The system was designed for economic benefit, not for security.

Ambient noise could be heard from another office within plain earshot near the vent in the son’s office.

TSCM test measurements from the TSCM ‘Acoustic Leakage Probe’ and the TSCM ‘CMA-100 Professional High Gain Audio Amplifier’, proved ambient noise could be heard even from the farthest office.

This was almost a perfect crime with no evidence left behind. Our expertise proved the eavesdropping that police were unable to find.

Michael Guadagno is a highly regarded and extremely well-versed law enforcement and investigative professional with an unusual trade specialty. He hunts spies, and he loves it! Mr. Guadagno is the founder and principle of Michael Guadagno & Associates, Counterespionage Investigations. Michael Guadagno & Associates’ primary function is technical counter-espionage detection, which includes his outstanding investigative ability. Mr. Guadagno is licensed, bonded, insured, and is board certified in the electronic countermeasures profession. He is also a graduate of NYS Criminal Justice Law Enforcement Academy. Mr. Guadagno is an honorably careered government law enforcement officer and the recipient of numerous letters of commendation from US Presidents, New York and North Carolina State Attorneys General, Chief Crown Attorney Toronto Ontario Canada, and professional associations praising his work and his successes. He has been the guest speaker and trainer at law enforcement academies in several states including the DoD Federal Law Enforcement Academy at Aberdeen Proving Ground, Maryland.

This article was written by an industry guest contributor. If you are interested in submitting a guest post or have an article suggestion, please contact us.