During our combined years at the medical examiner's office (spanning from late 2002 to late 2008), we collected GSR from every decedent with a cause of death due to a gunshot wound; every investigator did. However, the state laboratory had no longer accepted them for testing unless specific circumstances would warrant it. We cannot recall any submissions of GSR to the state lab. Instead it was recommended to collect DNA swabs from the decedent, firearm and other relevant evidence. Dean wrote the procedure that remains in place today.

Since returning to the private sector in late 2008, we have not had a case inquiring or requesting GSR testing—until recent months. In one case GSR was completed by the agency as routine protocol, and in two private consultations we demonstrated the unreliability of GSR and recommended more definitive alternative protocols for the cases. With these recent cases, we decided some information was needed. The information below is simplified and not intended to relate any scientific processes or principles beyond some explanation.

What is GSR and the collection process?

GSR, an acronym for Gunshot Residue, is deposited—or not—on the hands and clothes, or any other objects, of someone or something in the vicinity of a discharged firearm. 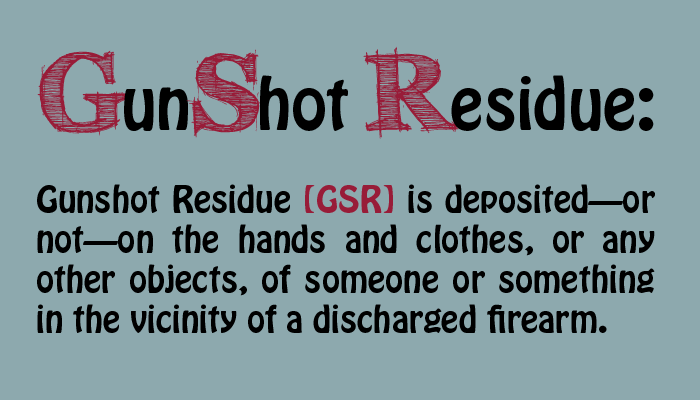 Special sealed containers with tabs bearing an adhesive substance are used to collect microscopic particles as directed in the kit—hands and face, as well as other areas of concern (i.e. clothing); there is one tab that remains sealed and unused as a control for the laboratory.

What is tested for?

The components are lead, antimony and barium. These are in the primer of the cartridge, and not the gunpowder of the cartridge itself (a common belief). The discharge creates a specific burned component of these three chemicals that is unique to cartridge primers—although similar to fireworks, not the same microscopically.

Generally, we do not rely on GSR to either support or refute a person being involved in the discharge of a firearm. Instead we rely on other available information, facts and evidence.

It is our experience that GSR will not further the quest for answers. There are only two possibilities to GSR testing, per tab collected and tested: positive and negative. If positive, it only confirms a person being in the vicinity of the discharge, not that they did or did not shoot. Similarly, if negative it is not conclusive they were not in the vicinity of or discharged a firearm. In addition, there is a possibility that the movement of the bodies may have spoliated that evidence. As this is microscopic and multiple areas are collected from, this is a variable that we cannot specifically address. 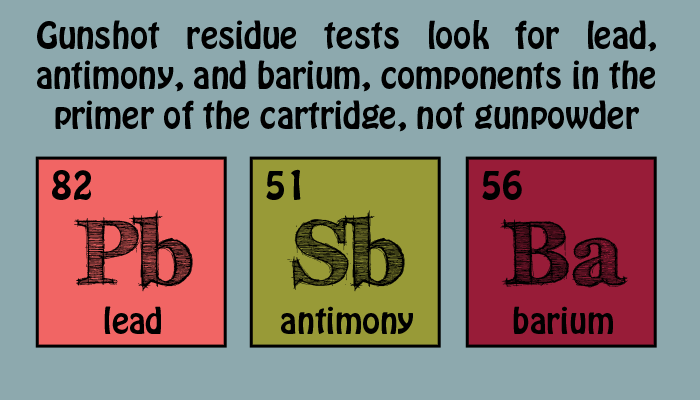 Most requests for GSR involve multiple persons—such as a homicide/suicide or suicide/suicide seen in domestic violence or end of life decisions of terminally elder people. The hope is that the GSR will tell who discharged the firearm and who was victim to the discharge without doing so themselves. The answer being sought is simply positive or negative for GSR, which gives four unspecified possibilities (alleged shooter and alleged victim):

As an example, in research Karen learned from a recent very notable case in which it was known who the shooter and who the victim was. In this case there was one confirmed particle (lead). Specifically, GSR was found on the shooter’s jacket in the form of 1 particle of lead found on the upper back portion of the right sleeve. No GSR was found on the decedent or his clothing, or on the hands or other areas of the shooter’s person. In the altercation the shooter was on the ground and the decedent was on top of him, in close proximity, and the firearm was a semi-automatic handgun.

The two scenarios are most often asked about are:

Positive results are circumstantial and will only indicate these individuals may have discharged a firearm, may have been in the vicinity of a firearm and was discharged, or may have come in contact with an item with gunshot residue on it. Similarly, negative findings will not preclude the above and that one or more of the persons discharged a firearm.

What does this tell us about GSR?

The only forensic conclusions are:

The Best Course of Action